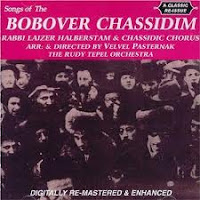 This leibidiger nigun is from Bobov. The recording presented here have half the nigun to the words of "v'apeik yas ameich..." from Ka Ribon.

A few of the chevra have already begun learning this one and it is sure to become a favorite whenever we are sitting together.

This is a Modzhitzer march sung by Reb Benzion Shenker. The Rebbe heard it this past Pesach in Lakewood and asked me to post it for the chevra to learn. In this recording it is put to the words of B'tzeis Yisroel from Hallel, but it can be sung without words for any occasion as well.

The main point of this post is to bring to your attention a specific nigun from the Kedushas Tzion that, by request of the Rebbe and Rav Benzion, we should learn and use during the davening and at tish. But as I learned more and more about the origins of the nigun, I couldn't help but share my findings as well. First, the nigun, as recorded on the Ma Ashiv album from Bobov:

And now for some very interesting history about this nigun's various travels throughout the Chassidish world and its specific connection to Hornosteipel.

In the newly published Magen Avos (a book of Bobover minhagim), there is the following footnote:

"The famed Bobover composer, Reb Moshe Goldman, a"h, heard from the Bobover Rebbe Reb Shloime, ztz"l, that this nigun was composed by his father, the Kedushas Tzion, ztz"l hy"d, to celebrate his chasunah in Ratzfert. This nigun became well-known because his zeida and mechuten, Rav Motele of Hornosteipel, came from Russia to the chasunah with a large entourage of his chassidim. On their return to Russia, they sang the nigun that they heard by the chassunah, and from then on it became very popular, especially amongst the chassidim of Russia."

Rav Motele's daughter, Sura Mariam, married the son of the Divrei Chaim, Reb Shulem Leizer'l of Ratzfert. They had a daughter named Chaya Fradel, who married the Kedushas Tzion. It was for that chasunah that Rav Motele traveled to Ratzfert. Apparently, the chosson's nigun caught the attention of the chassidim and they brought it back to "Russia". Think Karlin, Lubavitch, Slonim, Breslov, Chernobyl and its derivatives, and any other Chassidus that wasn't from Galicia or Polin.

I found it, therefore, interesting to note that after a little research, I discovered that the famous Reb Yom Tov Erlich, z"l, sings this nigun on his tape, Yud Gimel Middos, and uses it to tell a story of Reb Aharon Karliner. Also, the nigun is assumed by many to actually be a Karliner nigun.

The nigun, A Toiva Far A Toiva (Song 8 on Yud Gimel Middos):

For those interested, the Yiddish lyrics can be found here. (Scroll down till ניגון ח).

The note in Magen Avos continues: "The Gaon Rav Moshe Aryeh Fruend, ztz"l, Gaavid of Yerushalayim related that his father, Rav Yisroel Freund, ztz"l, was present at a particular chassunah of Reb Shulem Leizer'l Ratzferter's family, as he was amongst the singers there. They sang this nigun of the Kedushas Tzion, but they only sang it from the second stanza and on. Rav Moshe Aryeh himself used to sing this nigun for mitzvah tantz and said that the first stanza was added at a later instance."

When the Kedushas Tzion introduced the nigun for the first time at his chasunah, it was without the first stanza, and apparently it was not meant specifically for Lo Seivoishi but as a Nigun Simcha without words.

In Bobov itself the nigun was known to a much lesser degree. There is an account from a Sanzer chasid who visited Bobov years later. He told how the chazan sang this nigun, but only the eldest of the chassidim knew it. It seems that the nigun was reintroduced at some point later on with the additional first stanza.

The current Rachmastrivka Rebbe in Yerushalayim, is considered a talmid muvhak of Rav Moshe Aryeh, ztz"l. Here is a video clip of his own mitzvah tantz at his younger daughter's chassunah. At 1:10 on the time index, they change the nigun to the Lo Seivoshi nigun but they start at the second stanza and never sing the first - exactly as depicted in Magen Avos as the original way it was sung, even by the Kedushas Tzion.

How cool is that?

Another fascinating parallel is the Nigun Prozos Teishev Yerushalayim from Chabad. The similarities are obvious, yet it only consists of two parts. The story goes that on Kislev 19, 5729, the Lubavitcher Rebbe asked that these words be put to leibidiker music and on the spot, the chassidim came up with a nigun that until then was wordless and added the words "prazos teishev yerushalayim".

So we see how a nigun originated in Bobov, traveled to Hornosteipel, and from there became well-known in various forms to all of Russia and Ukraine. Years later, back in Bobov, a first part was added and it was put to Lo Seivoshi. Let's relearn this nigun and make it feel once again at home in Hornosteipel.

Please comment with any other info regarding anything in this post. Thanks!
Posted by Damesek No comments:

This nigun was composed by the Rebbe, shlit"a, on Shabbos Shekalim 5771, the Shabbos Aufruf of Avi Appel.

Rav Mordechai Twerski, the Hornosteipeler Rebbe in Flatbush and the Rebbe's nephew composed this song, one of rapidly increasing popularity. We have sung it a number of times in shul already but the Rebbe has requested the it be publicized officially.

The words are to the Ein Kelokeinu tefilah that are said at the end of davening and at Shalosh Seudos (by some). DOWNLOAD 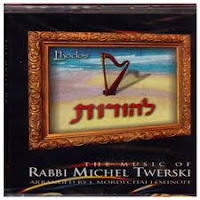 For the steadily approaching season of the Yomim Noraim, here the Rebbe's Zachreinu (Track 7) from the album, L'hodos. DOWNLOAD 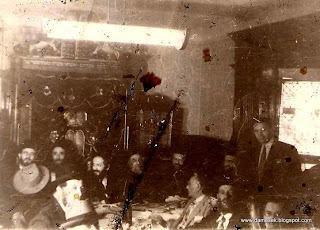 Here is a nigun, possibly of Vizhnitzer origin, that the "old-timers" in Milwaukee used to sing at the tishin of the Rebbe's father, Rebbe Yaakov Yisroel, ztz"l. A few months ago, the Rebbe related how after decades, he was suddenly reminded of this nigun. Not long afterward, he began to reintroduce this nigun and has sung it a few times by tish. Here it is for your listening pleasure and so that we can all learn it.

Here is a heimishe recording of Der Geller's Nigun with Reb Moshe Menachem Friedman on keyboard and the Rebbe's grandson Sruli Ausch singing.
DOWNLOAD
This nigun is also the first track on Avraham Fried's album, Avinu Malkeinu. (more info about the nigun)
Posted by Damesek No comments:

Email ThisBlogThis!Share to TwitterShare to FacebookShare to Pinterest
Labels: chabad

Recently, the Rebbe has introduced this nigun. In Chabad, it is known simply as "The Polish March". It is also sung in Yeshivas Chaim Berlin at the Purim seuda.

Sung by one the Rebbe's eiyneklech:
DOWNLOAD
From the Chabad Centennial Celebration album:
Posted by Damesek No comments:

This nigun is lebedig and a load of fun! Sung in Bobov, it is said to have been composed by Reb Yechezkel Rotenberg, hy"d, gabbai of the Kedushas Tzion, hy"d. The words are a variation of a classical piyut found in many old siddurim.

The first recording is from the Rebbe's Purim seudah (5768).

Here it is again, from the album Purim Tisch by Reb Moshe Yosef Kahane.

Below is a video from Purim in Bobov in the 1980's with Rebbe Shlomo Halberstam, ztz"l, of Bobov, our Rebbe's maternal uncle.
Posted by Damesek No comments:

This Shoshanas Yaakov was composed by the Kedushas Tzion of Bobov, Rebbe Benzion Halberstam, hy"d, our Rebbe's maternal grandfather. The rendition below is from the album entitled, Ma Ashiv.


To make it a little easier to learn, here it is sung by Avi Appel, without musical accompaniment. DOWNLOAD (3 MB)

A well-known Modzitzer nigun, often sung by the Rebbe, shlit"a, on the Shabbosim during the month of Adar and on Purim.
Posted by Damesek 3 comments:

If a download option is provided, please assume that we either own the rights to that recording or permission was received by the copyright holder. Thank you.